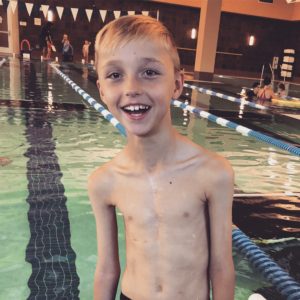 It’s balance week here at Elite, and we want to highlight one of our youngest patients, Blake Huggins. Blake is a twin sibling born in 2007 at just 5 pounds, 9 ounces. Blake is a miracle baby because he was born with only half a functional heart. He was born with a congenital heart defect known as Hypoplastic Left Heart Syndrome (HLHS). It is one of the absolute worst-case scenarios where only 50% of patients live through the first corrective surgery, but Blake is a fighter. He survived his first corrective surgery at 2 days old, a second corrective surgery at 4 ½ months old and two more corrective surgeries at 3 ½ years old. However, he contracted a secondary disease, called Protein Losing Enteropathy (PLE) after the last two surgeries. This can occur in about 1% of HLHS patients, and once again, Blake began fighting for his life. Having beat this disease almost entirely once, it returned with a vengeance causing Blake to go on the heart transplant list at 5 years of age. But less than 24 hours after his 6th birthday, and after two extraordinary wishes from he and his twin sister, the Huggins family received a call that there was a heart ready for Blake. Miraculously, it was only 12-weeks after being listed on the transplant list, which is very uncommon. Blake’s blood type (B-positive) is rare, which helped move him to the top of the list in his region and category. After 6 years and 2 days, Blake’s body would be “normal” for the first time ever. With the new heart being such a great match and with Blake feeling tremendously better quickly, he only spent twelve days of recovery in the hospital. He was home with a new heart for a most special Thanksgiving.

Today, Blake is 10, but he continues to deal with developmental delays and balance issues. With all the disruption to his body during critical developmental years, Blake continues to need therapy to build balance, strength and endurance. His vestibular disorders make him feel insecure especially on uneven ground, and he struggles with space and transitions. Endurance is also difficult, especially in extreme temperatures.

Dr. David Cox at Elite Physical Therapy and Balance said, “Blake was presented with balance deficiencies and developmental delays secondary to a congenital heart defect. Blake had exhausted the resources at traditional pediatric physical therapy and came to us for more advanced and rigorous treatment. Blake’s balance deficit is primarily in his vestibular system. The focus of his treatment has been on habituation and compensation strategies working on training his proprioceptive and visual systems to make up for vestibular deficits. Blake presents a challenge in the fact that he fatigues quickly and can only tolerate so much treatment at a time secondary to heart and lung condition and recovery there.”

Before Blake started therapy, he was unable to swim or ride a bike. Since the start of Blake’s therapy at Elite, his endurance has grown, his strength has increased, and his balance has become greatly improved. Recently, he even passed the test for the developmental swim team. Now his biggest goal is learning to ride a bike, so Blake has been asked to start bringing his bike to therapy. Dr. Cox is devoted to helping Blake conquer this next big, personal goal.

Lastly, Dr. Cox makes therapy fun for Blake. One of Blake’s favorite things to do is play on the Biodex. The Biodex is a special balance machine that allows Blake to practice his balance while playing video games, like baseball. This therapy apparatus allows Blake to shift his weight on his legs and feet while standing on the machine, training his brain to get back to equilibrium. Who knew therapy could be fun? Blake’s parents said, “We are extremely thankful for Dr. Cox and the whole Elite team. The vast improvements in Blake’s physical abilities, but most importantly, his confidence, means the world to us. This summer of therapy has changed all of our lives. With the utmost sincerity, Thank You Elite!”

If you have a child that struggles with balance and other vestibular issues like Blake, please click here to set up an appointment. Early intervention is key!  We would love to aid in his or her recovery as well.