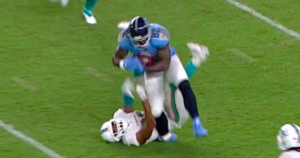 It’s Ankle Week at Elite Physical Therapy and Balance Center, but we didn’t expect to be reporting about a ghastly ankle injury of Titan Tight End Delanie Walker. The game was held in Miami and had two long weather delays due to lightning in the area. It was the longest recorded game in NFL history, and both players and fans alike were weary. With only minutes left in the game, Walker caught the ball, but his ankle was immediately smashed and pinned the wrong way under Dolphins safety, T.J. McDaniel. Walker suffered an ankle break with ligament damage leaving him out for the rest of the season.

Two other Titans were also injured in Sunday’s game. Marcus Mariota received an elbow injury and Taylor Lewan left the game early with a concussion. It has already been a rough beginning of the season for our Tennessee Titans.

Peripheral Neuropathy: Pain or Tingling in your feet? Dec 10, 2018